To accompany 25grams of Pea Protein Isolate, we have included key nutrients that deliver energy, focus & concentration, and enhance NO2 production, setting you up for a productive and purposeful day ahead.

Helps boost your NO2 production

Unived’s new athlete proteins Rise & Grind and Rest & Recover are Informed Sport Certified and have been specifically formulated for the athletes unique needs. Rise & Grind is meant to be consumed in the morning post workout, and has been formulated with the nutrients you require for lean muscle development, energy production, and clarity & focus so that you can have a purposeful & productive day ahead. Rest & Recover, as the name suggests, has been formulated to assist with prevention and repair of muscle breakdown, and contains phytonutrients to aid recovery, and nutraceuticals & minerals to enable restful and rejuvenating sleep.

I was looking out for a good replenishment protein mix to recover from a heavy workout schedule from weights training to long cycling rides. I tried the Rise ans Grind in tandem with Rest & Recover and within the first day itself I could see visible results. I strongly recommend this to anyone with an active lifestyle needing muscle repair & rebuilding post workout. 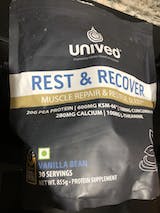 Very happy with the Unived products I am using (Pea protein, Salt tablets and gels). The results are positive which helps me with the faster recovery and prepare for my next run.
Strongly recommend to use Unived products to all. 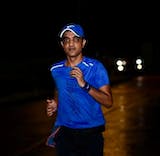 I’ve used other whey proteins and I’ve used this, Rise & Grind protein evidently improved my overall performance. Most importantly, if coupled with Rest & Recover, you’ll feel the effect in a month of usage. These two proteins helped me recover faster(please don’t ignore sleep) and come back with more energy in everyday training. Plus, it’s gut friendly… Thanks Unived for these lovely products.

How are Rise & Grind Protein works

Pea Protein Isolate: Plant-based protein and does not compromise the amino acid profile and provides a complete blend of all essential and non essential amino acids. It Provides 25g of protein and 4.54mg of BCAA which helps with lean muscle development. It also has a PDCAAS score of 0.93 and is highly digestible.

Digestive enzyme Blend: the digestive enzymes are active at different pH levels to break down of the protein at every level of the digestive tract which is acidic in the stomach and alkaline in the intestine. They ensure complete digestion of the complex protein molecule for its optimum absorption and reduce the chances of gastric problems like flatulence, stomach ache which are caused by undigested protein.

Probiotic: Bacillus coagulans is a type of good bacteria. This strain of bacteria is particularly robust & effective at alleviating stomach distress and other ailments like abdominal pain, diarrhea, flatulence, stomach distension and constipation. Compared with the placebo group, participants who took B. coagulans reported less disability and showed a reduction in marker for inflammation, had an improved ability to participate in daily activities, such as long walks.

A single serving of Unived Rise & Grind gives you 120mg Nitrate, which will help:

These improvements indicate that nitrate has ergogenic effects on cardiorespiratory endurance that benefits athletic performance.

Caffeine: A studies have considered a potential ergogenic effect of caffeine taken late in prolonged exercise. It improves vigilance, alertness and mood, and improves cognitive processes during and following strenuous exercise and improves physical performance. Caffeine has been shown to enhance performance by about 1 to 3 percent, particularly in endurance sports it can effectively boost physical and mental performance and help improve reaction time and ability to think clearly.

Vitamin B-Complex: these are water-soluble vitamins that assist in the utilization of proteins, carbohydrates and fats. These vitamins are known to increase endurance capability, aids in the production of new red blood cells and repair damaged muscles. Athletes with poor or marginal nutritional status of B vitamins may have decreased ability to perform high intensity exercise.

Protease: breaks down proteins & peptides to ensure break down of protein throughout the digestive tract for complete utilization and absorption of the protein and supports immune functions.

Amylase: it also includes Amylase, the enzyme that breaks Carbohydrates because Pea protein is a glycoprotein, which means it is difficult to break down with protease enzymes alone and requires treating with amylases too.

An ingredient that helps with blood flow to the muscles while supporting oxygen uptake by the muscles is ideal for sports performance.

A study in trained cyclists found that beetroot juice supplementation improves performance by 0.8% in a 50-mile test. These findings suggests that beetroot juice might have an ergogenic effect, increasing performance in prolonged cycling events that require alternations in relative intensity, from moderate to high VO2max, which is very characteristic of the stages of cycling races[ii].

It appears that acute supplementation with beetroot juice increases the power output with the same VO2 levels. This is an interesting finding for athletes as there is evidence that the economy is a key factor to improve cardio-respiratory performance increasing energy efficiency in endurance sports modalities. Time to exhaustion at several intensities (60%–100% VO2max, MAP or VT1) is another usual performance parameter that is improved with acute beetroot supplementation.

Caffeine (CAF) is commonly ingested by athletes because of its reported ergogenic effects. CAF may modulate central fatigue and influence ratings of perceived exertion, perceived pain, and levels of vigor, all of which may lead to performance improvements[iii].

Caffeine does not improve maximal oxygen capacity directly, but could permit the athlete to train at a greater power output and/or to train longer.

Potential mechanisms through which it improves performance

The Journal of the International Society of Sports Nutrition says that caffeine in the amount equivalent to one to three cups of coffee lowers heart rate during sub-maximal exercise. Recent work by the ACSM, on well-trained athletes reported that 3-9mg caffeine per kg (kilogram) of body weight one-hour prior to exercise increased running and cycling endurance in the laboratory5.

Thiamine (Bl): is part of the coenzyme thiamin pyrophosphate, which plays a critical role in the breakdown of glucose for energy and acts as a coenzyme in the metabolism of branch-chain amino acids (leucine, isoleucine, and valine)[vii].

Riboflavin (B2): is a part of two coenzymes (flavin mononucleotide and flavin adenine dinucleotide). The two coenzymes participate in the oxidation-reduction reactions during energy production within the metabolic pathways. Riboflavin helps extract energy from glucose, fatty acids, and amino acids.

Niacin (B3): is critical to breaking down carbohydrates and fatty acids during exercise. Its other role is to repair and replicate cells post exercise.

Pyridoxine (B6): Without adequate B6, all amino acids become essential, because our bodies cannot make them in sufficient quantities. Pyridoxine helps deliver oxygen throughout our body and helps nerve cells communicate. Pyridoxine also works with folate and vitamin Bl2 to lower blood levels of the amino acid homocysteine,

Folate (B9): is involved with DNA synthesis, the maturation of red blood cells and other cells, and amino acid metabolism.

Vitamin B12: is essential in the homocysteine, mitochondrial, muscle and hematopoietic metabolisms. It also assists in the utilization of proteins, carbohydrates and fats and is known to increase endurance capability, aids in the production of new red blood cells and repair damaged muscles. Athletes with lower intake of B12 like vegetarian and vegan athletes could be at a disadvantage when it comes to high intensity exercise.

Biotin (B7): is critical for the breakdown of carbohydrates to glucose, fat to fatty acid, and protein to amino acids. It also helps in the conversion of amino acids to glucose (gluconeogenesis).

Pantothenic acid (B5): is a component of coenzyme A, which is part of acetyl coenzyme A. Through which, pantothenic acid is involved in many metabolic reactions that extract energy from fatty acids.

[v] Coffee & health – from the institute for scientific information on coffee https://www.coffeeandhealth.org/topic-overview/potential-mechanisms-2/

What can one expect from Unived’s Rise & Grind Protein?

Rise & Grind Protein is formulated to support exercise and athletic performance. It is meant for those involved in endurance sports, from Olympic and professional athletes to recreational hobbyists. One can expect it to help maintain, repair and grow lean muscle mass, as well as, support the immune system, reduce muscle damage, improve endurance levels, reduce recovery time and reduce fatigue.

Are there any side effects associated with consumption?

There are no known side effects or interactions associated with the ingredients of Unived’s Rise & Grind Protein. Each ingredient is used in an adequate amount that is required for the desired effect. It is completely safe for long term use.

Does it contain any synthetic Amino acids?

No. we do not add any overages or any additional ingredients to increase the amino acid profile.

Unived’s Rise & Grind is an Organic Plant Based Protein with 120mg Dietary Nitrates which is from a beet root extract standardized to 6% nitrate content, it also has 100mg natural caffeine, 100% RDA of B-complex vitamins, which are all ingredients that help improve energy and physical performance. It also contains digestive enzymes for better break down and assimilation of the protein, while the Probiotic maintains a healthy gut microbial environment. In short it is a supplement that is going to take care of your energy and protein requirements, improve oxygen efficiency, cardio-respiratory performance and blood flow, effectively boost physical and mental performance and help maintain reaction time, vigilance and ability to think clearly.

Thus, it is a product that will help start your mornings with complete wakefulness, energy, and improved oxygen capacity to get through your day with excellent performance.

Add 1 scoop to 450ml of water. Blend using a shaker or blender until smooth.

Unived Rise & Grind Protein has been formulated to be consumed in the morning, post workout. For optimal results, we recommend you combine this with the Unived Rest & Recover protein, which is to be consumed at night.