MCT is a great CHO alternative, quick-release, energy source, that has gained a lot of popularity as an energetic substance for extended aerobic endurance exercises, especially more so when carbohydrate supply may be limited or unavailable.

MCTs are a type of healthy fat that contain 6-12 carbon atoms, which provide an instant source of energy as they are easily converted into ketones, an excellent mitochondrial fuel source. MCTs are leading the way as a preferred source of energy production in the body, when compared to glucose, since ketones produce far less reactive oxygen species (ROS) when they are metabolized.

This is kindaff strong MCT oil… works effectively for my intermittent fasting…. Plus tastes good but more than 1tspn means stomachache so beware for more consumption….Being on a ketogenic diet i’v to consume this multiple times in a day wd small proportions in bullettea/bulletcoffee…or as neat… as it has somewhat milder coconut flavour … this is actually tastier than my earlier brands

I've been consuming the MCT 70% for a little under a month now. I'm not new to MCT - I have used BulletProof's Brain Octane (C8) in the past. Unived's MCT 70% is pretty decent and it does give an energy boost.
I use it in a blender with hot coffee & butter & it gives a nice creamy texture to it. In a pinch, I simply eat it in powder form! It reminds me of milk powder - it has the same buttery texture. It doesn't blend as well in cold water though.

Overall, I'm happy with it. I'm giving it 4 stars not 5 because I'd really like Unived to make a pure C8 MCT powder. 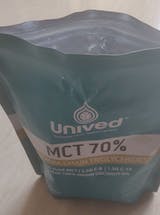 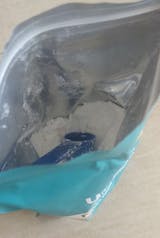 How is it digested?

Medium-Chain Triacylglycerols (MCTs), which typically contain fatty acids with chain lengths of ≤10 carbon atoms, are processed differently from long-chain triacylglycerols (LCTs) by the body[2]. Because of their chain length, medium-chain fatty acids can be absorbed in the gastrointestinal tract and transported to the liver via the portal circulation without incorporation into chylomicrons. As a result, it is hypothesized that MCTs are oxidized to a greater extent than are LCTs and have less opportunity for deposition into adipose tissue. Unlike long chain triglycerides (LCT), MCT will be broken down into glycerol and medium chain fatty acids (MCFAs), which will be directly absorbed into the blood stream and thereby transported to the target organs

Why is it necessary?

It has been shown that MCT plays a role in lowering weight, and decreasing metabolic syndrome, abdominal obesity and inflammation2. MCTs provide about ten percent fewer calories than LCTs – 8.3 calories per gram for MCTs versus 9 calories per gram for LCTs1. More importantly, reduced chain length also means that MCTs are more rapidly absorbed by the body and more quickly metabolized (burned) as fuel1. The result of this accelerated metabolic conversion is that instead of being stored as fat, the calories contained in MCTs are very efficiently converted into fuel for immediate use by organs and muscles. MCTs are thus a good choice for anyone who has increased energy needs, as following major surgery, during normal or stunted growth, to enhance athletic performance, and to counteract the decreased energy production that results from aging.

MCTs have proven useful in treating a number of medical disorders that involve impaired or damaged lipid (fat) metabolism. Thus, MCTs can be a useful addition to the diet of those suffering from any form of malnutrition or tissue wasting.

Will MCT oil cause weight gain?

MCT oil does not cause weight gain. Research shows that MCT Oil Powder can actually aid weight loss. Because the MCT is used up as energy almost immediately, your body is less likely to store it as body fat. MCT consumption can also help control appetite by promoting a sense of fullness, and other studies show that MCT may boost your metabolism, helping you burn fat and calories at a more efficient rate.

Are there any side effects of using MCT ?

If you are new to MCT, it may result in slight nausea or gastric discomfort for beginners if consumed in large quantities or on empty stomach. This can be minimized or eliminated by starting with very small doses at several times daily, and increasing the dose as tolerated.

Is this product for keto diet or can also be taken without it?

Most people can benefit from adding Unived’s MCT to their diet, regardless of whether or not they are following a Ketogenic Diet. While those on a keto diet, supplement with MCT Oil in order to support the production of ketones in the body. However, the benefits of MCT Oil, like easy digestion and absorption, energy supply, sharpened focus, improve cognitive ability, help with weight management, and heart and gut health are available to everyone.

Mix 2 scoops (7.2g) in your favourite beverage – coffee, smoothie, tea, hot or cold water). You may choose to consume it one or more times during the day.