Nutrition and sleep play a fundamental role in our health, but the complex and relationship between them is frequently overlooked. Resting enough is associated with maintaining a healthier body weight and can be beneficial for people who are trying to lose weight. Good sleep can improve your learning, memory, decision-making, and even your creativity.

WHO SHOULD TAKE IT AND WHY?

Anything that upsets the 24-hour cycle, such as jet lag, work shift, stress, anxiety, or even just a very late night, can have a detrimental effect on our sleep patterns, leading to problems like insomnia. The product is safe and made with plant-based ingredients, it is ideal for healthy adults (men & women), students, working professional, and even elderly population.

I regularly use Unived's pathbreaking CalDveg to keep my osteoporosis in check and a few other products like the liver detoxification and deep sleep solutions. These are wonderful blessings in the present chaos of time. Unived's services are world class. Keep doing well and thanks!!

I will buy one more soon I like it

N
Nihhaar
Helps me doze off

I was skeptical initially buying this product but it really helped me sleep. I felt it started working in 4-5 days. Also the ingredients combination in this product is very economical than to buy them individually. Thanks unived. 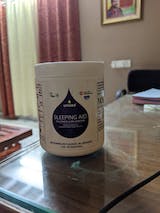 Known as the circadian rhythm, this internal body clock is on automatic repeat every 24 hours. It helps regulate our sleep and other functions such as our eating habits and body temperature.

The body clock resets everyday by using signals from external timekeepers, such as light and dark. The suprachiasmatic nucleus (SCN) of the hypothalamus, which directs the circadian program, has been called the brain’s “master clock”. Circadian timing, in which neurons fire in a 24-hour cycle, is organized in a hierarchy of tissue-specific structures located throughout the body. These tissue-specific rhythms are coordinated by the SCN based on light input from the outside world during daytime and by melatonin secretion during the dark cycle.

For example, during night time as it becomes darker, a message is sent to our body clock by the light-sensitive cells in the eyes, causing it to inhibit the release of hormones cortisol and adrenaline, and increase the synthesis of melatonin the sleep hormone.

Magnesium: The biological functions of magnesium are broad and varied, and include the production of nucleic acids, involvement in all adenosine triphosphate (ATP) fueled reactions, and modulation of any activity mediated by intracellular calcium concentration fluxes (e.g., insulin release, muscle contraction. Magnesium, seems to play a key role in the regulation of sleep.

KSM-66® Organic Ashwagandha Extract is one of the few herbs with significant effects on both psychological and physiological aspects of human functioning[vii]. KSM-66® is manufactured using a water-based extraction process, without the use of any alcohol or chemical solvents, based on the principles of Green Chemistry. It supports a reduction in stress and anxiety, enhances focus, supports immune functions, and aids sleep and relaxation.

KSM-66® has the most extensive set of research studies and clinical trials; 22 studies – 11 published studies, 6 additional studies completed and in peer review and 5 ongoing studies. KSM-66 has 30 Quality Certifications including USP, NSF, UL-NPA, and WHO GMP, and is 100% Organic Certified by USDA and EU

L-Theanine: research indicates that L-theanine could be beneficial for a good night’s sleep, which could be because it helps to promote relaxation. It is a unique non-proteinic amino acid that has been reported with predominant therapeutic values present almost exclusively in the tea plant (Camellia sinensis). L-theanine is thought to affect both the levels and functions of neurotransmitters in the brain. For example, L-theanine injection has been shown to raise levels of glycine, an amino acid and inhibitory neurotransmitter which helps calm one down. It raises brain levels of serotonin and GABA, two other inhibitory neurotransmitters. Finally, L-theanine may block L-glutamic acid from binding to the excitatory glutamate receptors in cortical neurons (nerve cells in the cerebral cortex).

[xiv]Helen Doll et. al., “Pyridoxine (vitamin B6) and the premenstrual syndrome: a randomized crossover trial”, Journal of the Royal College of General Practitioners, 1989, 39,

Glycine: a nonessential amino acid plays an essential role in the peripheral and central nervous systems. Its acts as an inhibitory neurotransmitter and improves subjective sleep quality and sleep efficacy, lessens daytime sleepiness and improves performance of memory recognition tasks.

KSM-66® Organic Ashwagandha Root Extract: our vegan KSM-66® Organic Ashwagandha is a root-only extract standardized to 5% withanolides by HPLC, which skips the milk pre-treatment and is the highest pure withanolide concentration available and acts as a GABA-mimetic that reduces over-excitation of neurons, thereby producing calmness and reduces stress.

L-Theanine: It is extracted from Green Tea Extract. The biggest benefit of L-theanine is it promotes relaxation without sedation. It can also reduce perceptions of stress and improve cognition as well as increase the alpha-brain wave activity indicates a relaxed state. Because of these properties, L-theanine is an excellent supplement to take before bed to help you “wind down”.

Vitamin B6 (as Pyridoxal 5-Phosphate): it is needed for normal brain development and function, and helps the body make the hormones serotonin and norepinephrine, which influence mood, and melatonin, which helps regulate the body clock.

Is Unived’s Luna safe for long term use?

Yes, the product is safe for long term use.

Will I get addicted to the product?

No, this is a non-addictive formulation. It is also free of Melatonin.

How long does one take to fall asleep after consumption?

The time of onset will vary from person to person. We recommend you consume the product between 30-60 minutes prior to your desired bed time. Once you understand how long it takes to work for you, you can adjust the intake to suit your body.

The product has been formulated to help improve the quality & duration of your sleep.  Consuming it regularly should help normalize your sleep cycle.

Adults take 1 scoop daily with 150ml of water 30 min prior to bedtime.