Unived’s CURCU-FREE translates to ‘curcumin-free’, conveying exactly what this product does, which is delivering the highest amount of ‘free curcuminoids’ into the blood-stream plasma & organ tissue, more than any other curcumin extract on the market. The curcumin we use is a GREEN non-nano formulation, manufactured via a water based process with no synthetic emulsifiers – based on a green delivery technique (FenuMATTM).

Unived’s Curcumin Capsules CURCU-FREE translates to ‘curcumin-free’, conveying exactly what this product does, which is delivering the highest amount of ‘free curcuminoids’ into the blood-stream plasma & organ tissue, more than any other curcumin extract on the market. CURCU-FREE contains CurQ® which has proven health benefits like antiinflammation, lowering homocysteine levels and maintaining good heart health, protection against neuronal damage and learning and memory errors, helps reverse alcohol induced liver damage and helps maintain healthy lipid profile along with all the benefits of curcuminoids from conventional turmeric extract with an impact of 45.5 folds more than conventional turmeric extract. It is packed with Longperin™ providing 10% piperine which is also has antioxidant, detoxification and anticancer potential as shown by published studies.

Curcu-Free can be consumed by everybody for varied purposes, some would like to incorporate this product just as a natural antioxidant to enhance immunity, some would use it to reduce the effect of inflammation, and others might consider it to reverse the effect of alcohol consumption damage. Curcu-free is a versatile product which one can add to their daily regimen for various benefits without worrying about any side effects as the product is natural and vegan friendly.

WHAT IS INSIDE UNIVED’S CURCU-FREE?

CurQfen® is a 100% natural, GREEN non-nano formulation of curcumin for enhanced absorption and systemic bioavailability upon oral administration. It is a patented ingredient developed using an in-house GREEN technology – FenuMATTM. CurQfen® is a unique combination of turmeric extract and debitterized fenugreek powder rich in soluble dietary fibre, formulated by a water-based process[1].

WHY IS UNIVED’S CURCU-FREE BETTER?

CURCU-FREE contains CurQfen® which is better than conventional curcumin extract because of it’s;

CurQfen is a water dispersible formulation of curcumin with highly mucoadhesive and gastro retentive and non-digestible, but fermentable prebiotic galacatomannans from fenugreek.

The functionalities of fenugreek soluble fiber/protein composite, such as high swelling index in water, gel-like character and gummy nature, helped to establish a strong binding of colloidal curcumin in the fiber network, providing a microencapsulation effect which provided protection against rapid metabolism during gastrointestinal transit1.

Upon swelling in the gastrointestinal tract, colloidal and amorphous particles of curcumin leaches from the network and directly absorbed from the intestinal tract by crossing the membrane. High mucoadhesive character, water miscibility and small particle size provides better membrane permeability than the standard crystalline curcumin.

Clinically substantiated claims of CurQfen® are:

[1] Vijayasteltar B. Liju, et. al, ‘Enhanced bioavailability and safety of curcumagalactomannosides as a dietary ingredient’, The Royal Society of Chemistry 2014

The Turmeric Cucrumin Complex is great! Super healthy, and easy to take! 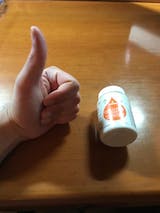